Made two variants for the police officers on Anarmar. I am not sure, which one actually looks better. The one with curved and round forms is closer to the original concept art I made years ago – that's how I imagined it actually at the time. But I also experimented with the form and made a slightly different visor here. I can't say I am satisfied with it, but it does have some good looks, such the rear part of the helmet, which looks quite close to the Clone Troopers. 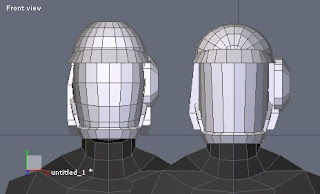 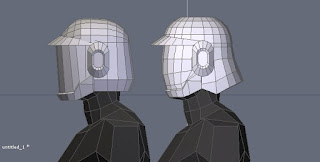 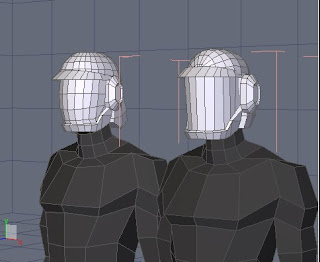 As I might have mentioned prior, the droid was a real pain, when I started working on it. I couldn't decide on its general looks: in most cases it lacked necessary details, like utility or realist approach in terms how Droids are made in Star Wars.

It was difficult for me to make the spherical form, which didn't work the right way at first. It supposed that the visors come through the whole head, with other details attached on the sides. The droid hovers over streets and public and is equipped with minor blaster.

While the droid has a basic look, we've come through many different ideas, which I might post later. We have a great deal of characters, which are far more complex (e.g. Bothan species, Security Droids, Bith, Duros, etc), and we made sketches for all of them. It also took some time to find suitable reference pics, and make all the comments and descriptions.

Needless to say, making the model itself, texturing it and attaching to skeleton (sometimes animate) was also a challenge.

Below is a link to the topic at JKHub, which includes all of the FAQ regarding the mod development. Due to many questions on the status and others, I had to make this document.
The link: "The Article"
Автор: Unknown на 15:19 Комментариев нет:

I've been asked about DP many times now, and specifically about the date release. We can't reveal these just (due to some specifics), but there is an explanation, why we were silent in the Internet, while we still continue our work on the mod.

It is possible to read an article about this matter at JK Hub forum or the The Dark Pastime page on moddb.com.

The important thing to keep in mind: we never stopped the process, as now we are checking Chapter I, revising the cutscene and continue making maps for other parts of DP.

For now, have a look at the new Sentry Droid to appear in one of the first missions:

The maps have always been a priority, especially in the beginning, when we just started working on DP modification. The story was the main thing, that set the path to create a mod specifically for JK series. At the time we paid less attention to models (props and characters), as well as textures – for the most part we looked for these elsewhere, or used what we already had from Jedi Academy.

This was not an option, when it became apparent, that the levels had to be different, as the Player would visit various worlds, such as Dantooine and Ord Mantell. All of them had to look unique in terms of materials at least.

In terms of already established locations from Star Wars we wanted them to be authentic. So for such place as Sulon (Kyle Katarn's native planet) we borrowed some textures from Dark Forces II video game. While we used many of them on the city walls, bases, etc, we didn't really like the way they looked. The quality wasn't that good.

So when I had time I spent time on redrawing all the textures, leaving the color only. All details and elements were recreated to look like a better version of Barons Hed walls, doors, wood floor and many other elements.

Textures from Shiib (sandy world with ruins), Anarmar (futuristic skyscrapers), Uffel (stone estates and old streets), as well as some others went through the same process, in order to move further from original pictures. Many of them were made from scratch, while others were made during my trips abroad, as I took photos of walls, pavement, roofs, etc.

In this regard Chapter I of the mod – which includes the above mentioned Ord Mantell and Dvorn – wasn't a creative work in the very end. As mentioned on JKHub, the Jedi Academy engine has various limitations, and these can be a real headache, when you want to make something great, but you are restrained from using certain tools, like realistic trees, lot of grass or almost endless forest location.

This is the case with the last map in Chapter I, where you've got to explore the woods on a swoop bike. I changed this map several times over the years, sometimes starting from scratch over and over again (I think there were 5 versions in total). I also tried different methods to create the terrain, but it never ended in the planned version.

Currently, the map is being tested, while other parts of Chapter I are complete and even the bugs have been removed. This forest map was a difficult work of almost one year to figure out all the issues.

Working for many years on a variety of projects, I often received dozens of questions about them, including The Dark Pastime, the unofficial modification of Jedi Academy video game. Sometimes I address these on the forums (such as www.jkhub.org, www.jediknight.ru before that) or on a specific gaming site (www.moddb.com).

With the recent complications regarding Chapter I (to be precise – with the last map in the Chapter), I thought it would be just, if I posted smaller pieces of information on the development progress and issues in a separate blog.

I also plan to release major news both here and on The Dark Pastime moddb page. Aside from the modding I plan to post publications regarding gaming in general, Star Wars, other films and franchises, among a few other topics.
Автор: Unknown на 08:19 Комментариев нет: